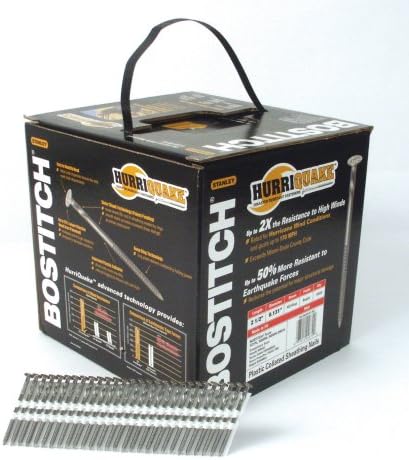 Every now and then a special product comes along and turns the construction market on its head. The Bostitch Hurriquakeâ ¢ Nail, designed to withstand the most prolific hurricanes and violent earthquakes, is one of those products. Not all nails are created equal, and many are simply not tough enough to do battle with Mother Nature when She really brings it on.

When Bostitch set out to develop the worldâs most advanced sheathing nail, he focused on enhancing the head and the shaft. What he came up with won Popular Science's 2006 Innovation of the Year honor. Welcome to the next generation of nails.

"p""strong"The Head"br"The Hurriquakeâs head is 25% larger than traditional sheathing nails. Why? Hurricane force winds create a powerful vacuum-like phenomenon called uplift that often rips standard nail heads through roof sheathing. The typical result after a big storm is an insurance and construction disaster: hundreds of houses without roofs, and many without walls, too. Thanks to the enlarged head, Hurriquake nails can withstand uplift forces of a whopping 271 pounds per square foot, substantially more than other nails. The head also has two other features worth mentioning. First, every head is marked for identification during code inspection (HQ1 or HQ2, depending on which thickness youâre using). This should save contractors a lot of hassle. Second, the patented design prevents you from driving nails in too deep. The benefit of this is significantly less counter-sinking and pulling through in bad conditions. "p""strong"Shank Design"br"Discussions of nail shaft design donât normally excite, but the Hurriquakeâs shank is such a departure from the norm that it deserves a serious look. Typical nails are smooth near the bottom, and consequently they pull out when under stress. Hurriquake nails, on the other hand, feature a special ring geometry that grabs hold of the wood when pulled. Hurriquake nails are rated to hold in gusts up to 170 mph. and are strong enough to outperform Miami-Dade Countyâs code. Regular nails also have a series of parallel rings on the upper part of the shank. Unfortunately, these rings create voids (or spaces) in the sheathing theyâre meant to hold in place, making the nails prone to losing their hold or breaking in hairy conditions. By contrast, the Hurriquakeâs shaft actually fills voids in sheath ing, thereby increasing hold strength. "p""strong"Earthquakes"br" Hurricanes have gotten the lionâs share of media attention recently, but it shouldnât be overlooked that the Hurriquake is also designed to minimize structural damage wrought by earthquakes. After a major earthquake, itâs common for structures to lean or droop. Thatâs because earthquakes put a huge amount of stress at an angle perpendicular to the nail, a phenomenon known as shear load. When the load becomes too much for the nails to bear, they bend or snap and the structure fails. With Hurriquake nails, the chances of this happening are minimal. Hurriquakeâs "ring shank" stops halfway up to leave the middle of the nail, which takes the biggest beating during an earthquake, at its maximum thickness. This additional strength offers up to 50% more resistance to earthquakes forces. "p""strong"Whatâs in the Box"br"4,000 2-inch-by-2-1/2-inch-by-.131-inch plastic collated stick framing nails "p" "tbody""tr" "td" 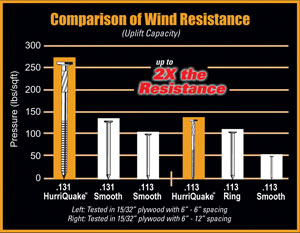 "br""small""em""strong" The exceptional shear force capacity enables structures to better withstand earthquakes. "h3"From the Manufacturer "p"The Bostitch Hurriquake Sheathing Nail delivers outstanding performance in roof, wall, and floor sheathing applications. The nail delivers up to 2-times the resistance to high winds and is rated for hurricane wind conditions and gusts up to 170 MPH. The Bostitch Hurriquake Nail reduces the potential for major structural damage and can offer your home up to 50-Percent more resistance to earthquake conditions. with its head and shank technology, the Bostitch Hurriquake Sheathing Nail is the most advanced nail ever created.

Get offers and inspiration straight to your inbox.

on 16-09-2021
Japan Centre offers the largest selection of authentic Japanese food, drink and lifestyle products in Europe. From well-known Japanese kitchen staples from rice and noodles, to freshly baked goods, matcha and sake, shop from Japan Centre’s extraordinary range of over 3,000 different products on the UK's favourite Japanese food site.