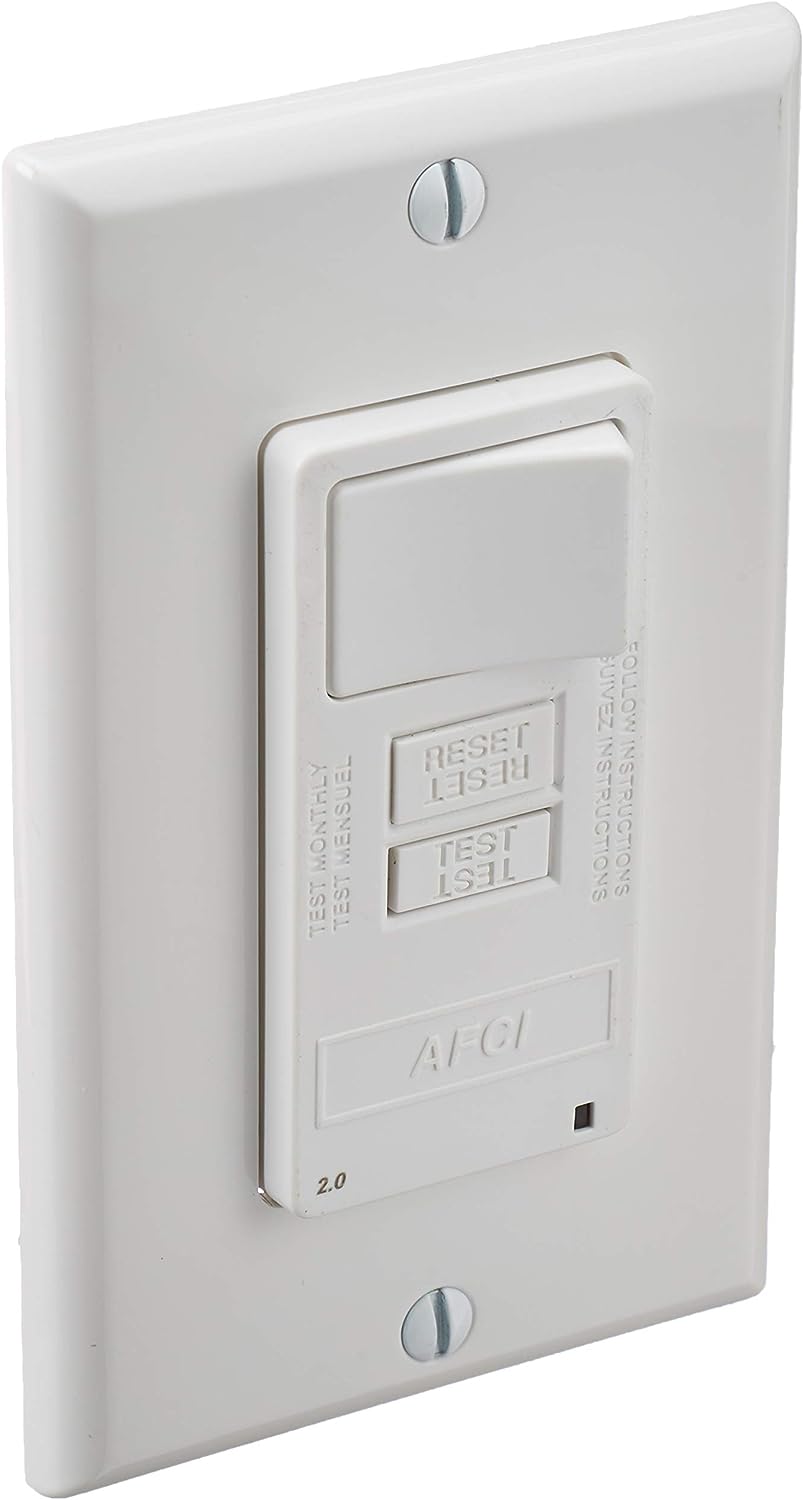 The Leviton Combination ASFW1 AFCI/Switch provides the convenience of a single pole switch to control the lights and important AFCI protection to help protect against electrical fires resulting from arc-faults. This device is great way of adding AFCI protection to an existing circuit by simply replacing a standard switch with an AFCI protected switch. It can be easily installed in kitchens, family rooms, bedrooms, dining rooms, hallway any room in the home where there is a light source requiring a switch and AFCI protection is needed(neutral wire is required to be used). It should be placed as the first outlet on the circuit to maximize protection.

The AFCI component of this device is designed to identify potentially dangerous arc-faults within a homeâs electrical system - which includes the wiring within walls, fixtures, appliances, equipment and extension cords - and respond by interrupting power to help prevent arc-faults that may lead to a fire. It features a Test and Reset button on the face of the device; offering the convenience of localized control which saves homeowners a trip to the breaker panel.

The Leviton OBC Combination AFCI/Switch provides feed-through protection and is able to detect downstream parallel and series arc-faults, as well as upstream series arc-faults on the home run portion of the branch circuit when installed as the first outlet. These potentially dangerous arc-faults create high intensity heating which may result in burning particles exceeding 10,000 degrees Fahrenheit and may over time ignite surrounding materials such as wood framing or insulation.

According to the National Fire Protection Association (NFPA), arc-faults are 'the principle electrical failure mode resulting in fire'.

What is Arc-Fault Protection?

- AFCIs are designed to detect a wide range of arc-faults to help reduce the likelihood of the electrical system being an ignition source of a fire.

- AFCIs function by cutting off power when potentially dangerous arcing is detected.

- AFCIs are now required by the National Electrical Code in many areas throughout the home.

Often unseen, arc-faults can occur anywhere in the homeâs electrical system including, but not limited to:

- Within walls from nails, screws or staples inadvertently driven into wires

- Through brittle or heat-damaged cords

Because arc-faults are sometimes not visible it is important to have a means to detect a potential problem in a homeâs wiring. The Leviton OBC Combination AFCI/Switch is an ideal solution - it installs easily in a standard wallbox and may be used for new construction, retrofit and replacement applications.

AFCI vs. GFCI â What is the Difference?

AFCIs and GFCIs are both important devices to incorporate into a homeâs electrical system. It is important to recognize, however, that although they are similar in appearance they offer very different protection. The chart below outlines the overall function of these two devices and offers guidance regarding where they should be placed in the home according to the National Electrical Code.

HAND-PICKED BITS & BITES
Get the recipes from Jamie's new TV show, Together
Bring a little joy to your day with our healthy lunch recipes
Sign up for our newsletter here to enter our cookbook prize draw. Ts&Cs apply
Cook up a storm with an online class at the Jamie Oliver Cookery School
Find out more about our B Corp status and read our Social Impact Report
Order your copy of Jamie's brand new book Together today!